So this popped up on my radar yesterday as it released into Open Beta and I wasn't sure what to expect to be honest. I played Cuisine Royale before and that clearly was a testing ground for this.. it was a lot less optimized than this and it definitely felt pretty awesome!

Enlisted is an MMO squad based shooter for PC, Xbox Series X|S and PlayStation 5 in World War II where you act as an infantry squad leader, tank crew or an aircraft pilot. The weaponry, soldier’s uniform, appearance and capabilities of the vehicles in the game are in line with historical facts.
Each squad consists of several soldiers who can be trained, equipped with new weapons and items and then taken into a battle. You control one soldier directly while other soldiers will be controlled by AI which obeys your orders. You can switch between soldiers and stay at the most interesting point in a battle event after part of your squad has been defeated.

Dozens of units with different specializations participate in Enlisted battles simultaneously. This ensures maximum density and spectacularity of a battle while maintaining a high contribution with each participant for the victory of the team. Infantry, armoured vehicles and aircraft battle together and you can try several roles in just one game session.

CAMPAIGNS
How the war changed
Opposing nations, as well as the available squads, weaponry, equipment, armoured vehicles and aircraft correspond to what has actually been presented in this war theatre scenario, so that each campaign, for example the defence of Moscow in 1941-1942 or storming of the Reich Chancellery in 1945 - offers a unique gaming experience.

SQUADS
Your personal army
Each squad consists of several soldiers who can be trained, equipped with new weapons and items and then taken into battle. You control one soldier personally while others will be handled by AI and obey your orders. You can switch between soldiers and stay in the most interesting point in a battle even after some of your soldiers are defeated.

WEAPONRY
Hundreds of realistic weapons examples
Detailed models in firearms, grenades, mortars, flamethrowers and anti tank guns. There are even stationary machine guns in the game that can be built by engineers! All of the weapons correspond to the historical prototypes and were actually used in particular military campaigns.

VEHICLES
Legendary ground vehicles and aircraft
Tanks, wheeled armoured vehicles, fighters and attackers have been recreated with high precision and await their commander. During work on the vehicles in the game, development used their experience with the military online simulator War Thunder.

●About Me
Hi! My name is Samuel, what's up? I am 26 years old and live in Canada (I am Dutch though!). Thanks for checking out my channel. I upload a wide variety of games in 1440p60, including but not limited to Gates of Hell, Men of War (Assault Squad 2), ARMA 3, Red Orchestra 2, Rising Storm 2: Vietnam, The Wargame Series, SQUAD, Post Scriptum, Heroes and Generals & Company of Heroes! I try to maintain a healthy balance between fun and tactical gameplay, mixing videos with tips, tricks and random gameplay that can be from any game! 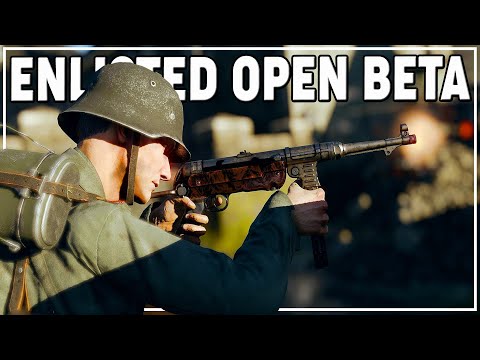 Game: https://enlisted.net/en/ So this popped up on my radar yesterday as it released into Open Beta and I wasn't sure what to expect to be honest. I ...